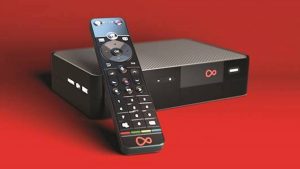 The platform is described as ‘the new way to watch Virgin TV,’ and comes with a refreshed user interface along with a voice-control enriched remote. Similar to Sky Q, the platform is based around one primary set-top box with the ability to add mini boxes to TVs around the home and an app for mobile devices. This unified platform will share recordings, along with pause points, across all screens including mobile devices.

A unique feature of the 360 platform however is the addition of user profiles, something absent from Sky Q. This allows individual members of a household to set favourite shows and channels, and Virgin says that individual profiles will be presented with personalised recommendations.

Another selling point for the platform is its new remote which has a button to easily switch between profiles and an in-built microphone for searching for content. Unlike Sky, voice search will not present results from Netflix.

Virgin also confirmed that there is no support for third-party voice control platforms like Amazon Alexa and Google Assistant, but did not rule it out for the future.

As with the previous generation, the platform will integrate streaming apps such as Netflix, Amazon Prime Video and BBC iPlayer. There are currently no plans to integrate Disney+, but chief digital officer David Bouchier said that Disney is a strong partner of Virgin’s, and expressed confidence that the app will arrive “next year”.

While aggregation continues to be a focus for Virgin, Bouchier also said that “formal bundling is not something required” – indicating that we are unlikely to see a co-branded TV package like the bundle of Sky and Netflix.

The biggest change between 360 and the previous V6 platform however is under the hood, with Virgin confirming that the platform’s architecture has been shifted over to Liberty Global’s Horizon platform.

The platform will launch later this year for new and existing customers at no extra cost, but will require users to also sign up for Virgin Media’s broadband offering. Sky initially had a similar requirement around the time of Sky Q’s launch, but that was dropped within months. However, with Virgin being a much more established FTTH brand, this may be a requirement for the long-term.

Surmising the platform, Bouchier said: “Virgin TV 360 is our most impressive TV service to date, providing one of the most complete and comprehensive viewing experiences available in the UK. Backed up by our ultrafast broadband, our new service allows TV lovers to watch all of their favourite channels, apps and on-demand content in one place or on the move. This really is game-changing TV and we know our customers will love it.”