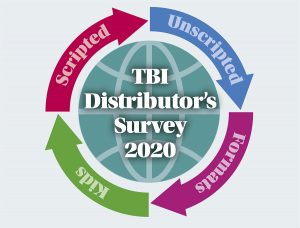 From Mumbai, Sydney and Dubai, to LA, Stockholm and London, TBI’s Distribution Survey this year is truly a global affair. Its findings come from the biggest companies in the business as well as some of the most bespoke, and represent the experiences of thousands of people working across the world

Few areas of the content business have adapted as quickly over recent years to the vast changes in the business as the distribution sector, with companies large and small adeptly planning and executing savvy strategies to ensure they remain relevant. The effect of the Covid-19 pandemic has again tested this sector’s resolve and it is clear from this year’s findings that the past six months have had a considerable toll on sales. Yet there are positives and an overwhelming optimism that the industry can rebound. 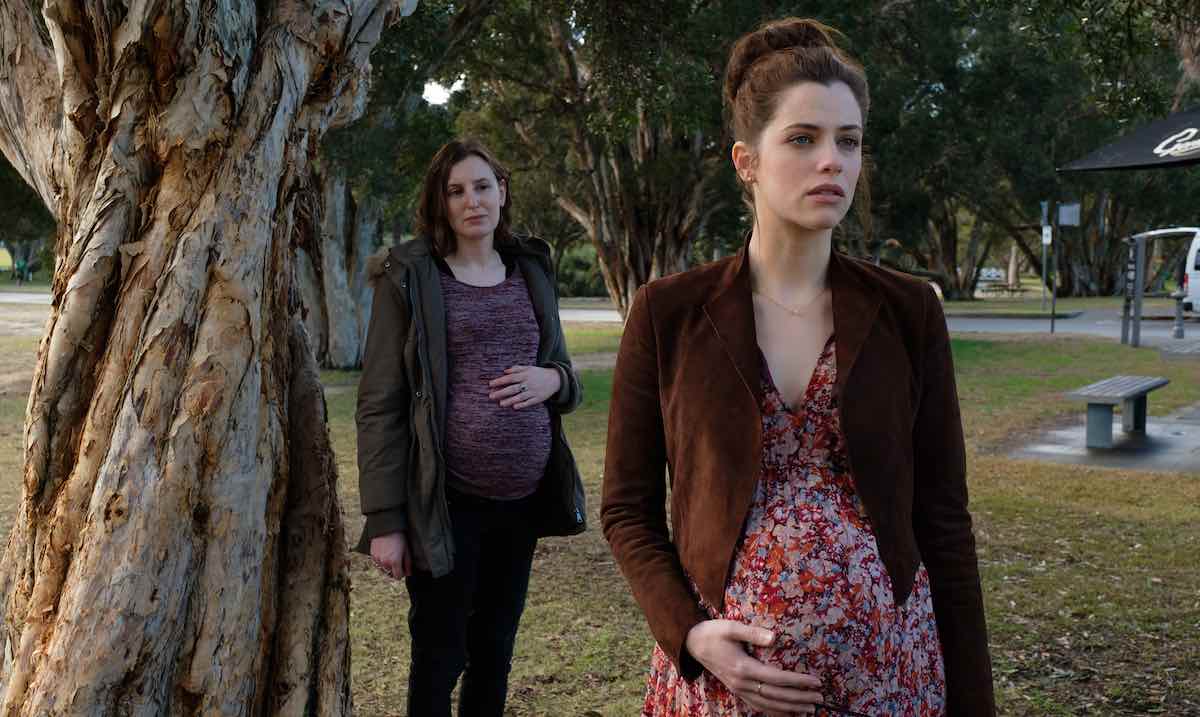 The Secrets She Keeps

Drama has been hit hard by the pandemic as production hiatuses impact delivery but demand for completed series has soared as content-hungry services secure deals. But that’s only half the story

The popularity of scripted product is well documented but the pandemic has put strains on this sector like no other.

Distributors have found themselves at the centre of this conundrum, with deep financial investments made into shows that are in some cases six months delayed by Covid-related production issues.

The issue is immediately apparent in this year’s results, with more than 50% of companies involved in the sale of scripted product reporting a decline in annual revenue in 2020 because of the pandemic.

The severity of the hit is widespread with some shows fortunate to have shows wrapped just in time prior to lockdowns and others forced to pause production entirely Almost 20% say they have seen a decline in revenue in excess of 50%, while another 18% say the reduction lies somewhere between 25% and 50%.

Yet the picture is complicated. Almost a third of respondents report that the pandemic has had little impact on their revenues, while 11% say that they have actually seen revenues rise by up to 25%. 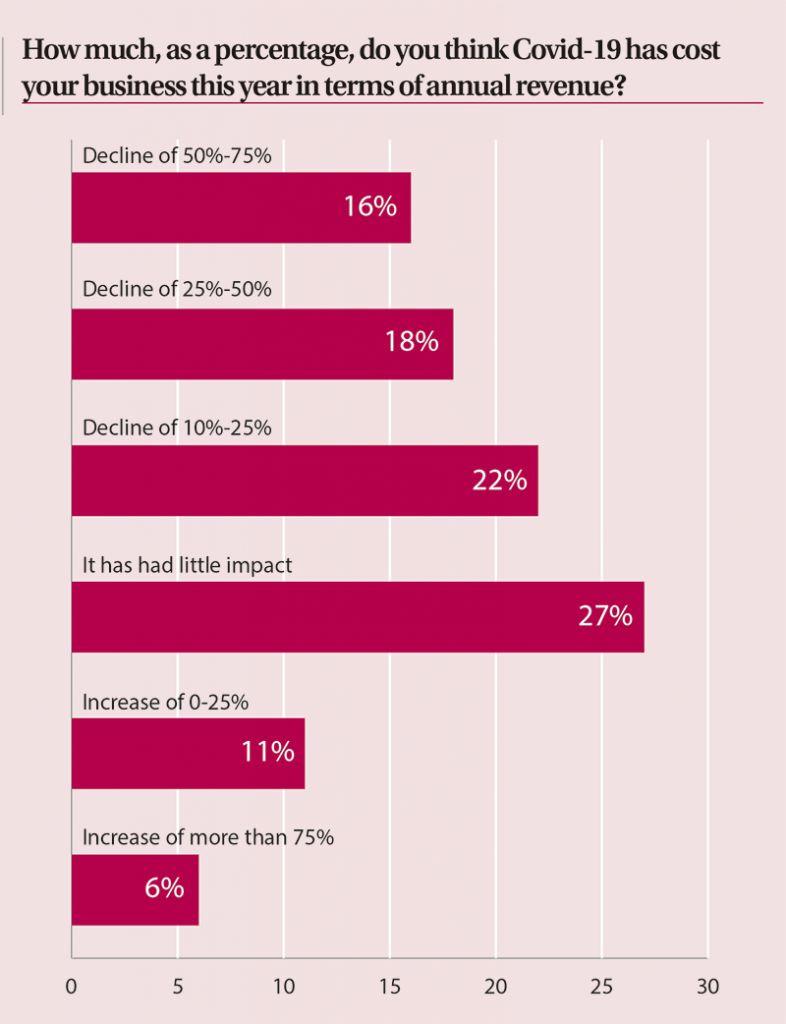 It underlines the fact that the impacts of Covid on scripted have been widespread. Sarah Tong, director of sales at Hat Trick International, says that “delays in UK broadcast dates and therefore international availability” has had a huge effect, while Rick Barker, head of sales at The Secrets She Keeps firm DCD Rights, adds that the hiatus in productions and local lockdowns “have had an impact on talent being in the correct filming locations.”

“Production delays are very costly,” adds Dan March, managing partner at Dynamic Television, whose slate includes Sommerdahl Murders and Creepshow. “You have the holding cost, interest cost, and ultimately you are pushing out revenue which is a significant cost. The loss of ad revenue for broadcasters has dramatically impacted commercial channels, which has resulted in reduced budgets and less buying.”

While production has been severely hampered, broadcasters and streamers continue to put money into some stock choices on the genre front. Almost 30% of respondents said crime drama remained among their best-sellers, with thrillers cited by 26% and more than 20% making much of their money on relationship series.

And while Covid has been the talking point for much of the industry recently, it has also coincided with the launch of some major US studio-backed streamers. As those DTC entrants move to retain rights for their own services, the challenge for many distributors remains ensuring they have a pipeline of product to sell – or striking deals with the non-studio affiliated SVOD’s. 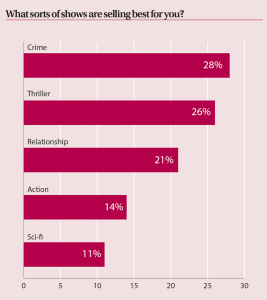 Despite their penchant for global deals – at least on finished tape sales – less than a quarter of respondents report that the rise of SVOD players has provided the greatest challenge for distribution over the past 12 months, not considering the pandemic. More than a third say market consolidation is the problem to overcome, while a similar number report that accessing and controlling rights is the issue.

In response, certain distributors have become key financial partners for producers, delivering more than simply deficit financing to ensure they get a back-end on sales rights. More than half say they are financing scripted series earlier than ever before, a stat that is backed up by the fact that 41% say rights ownership is the most pressing issue on their business. Almost 65% say financing and investment is the main challenge.

Numerous respondents added that the market has rebounded quickly following the intense business shock experienced in March, April and May, although there were also many reports of delayed payments and acquisition plans on hold that are continuing to impact distribution. Almost 90% say greenlights on deals have been delayed, while the ability to attend markets remains unclear. 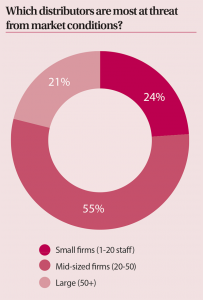 Practices are shifting in this regard – almost half of respondents say they are now using digital distribution platforms, with around a half hoping to attend a similar number of physical events in 2021 as they did in 2019. But there are also clear signs that the business is providing opportunities.

“It has led to some significant sales for us,” says Chris Bonney, CEO of rights at Cineflix Media. “We concluded a major global deal with Apple TV+ for Tehran. Coroner is performing well too – we have two seasons in the bag, we recently announced season three and sales to The CW in the US and Channel 4 in the UK, and NBCUniversal International Networks.” New entrants are also offering potential, evidenced by the sales of Happily Married to French streamer Salto.

“Distribution is still a lucrative and necessary business, but we’re in a contracting industry where individual shows can too often be feast or famine,” says March, neatly summing up the business and pressures at present.