HBO Max in the US has taken exclusive first-window SVoD rights to SMASH!, the new animated series from 41 Entertainment. 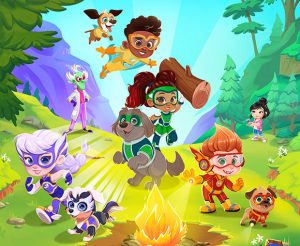 The 52×11′ series will stream on the WarnerMedia-owned service in the US in 2022, with Discovery Family Channel and Discovery Familia taking exclusive linear rights.

SMASH! is set on a camp in Bavaria, Germany, where kids with superpowers go to prepare to become the next generation of superheroes with their super-powered pets.

It features characters from Guangzhou in China, Cape Town in South Africa, St Petersburg in Russia, Glasgow in Scotland and São Paulo in Brazil.

Super RTL in Germany has taken exclusive rights to the series in Germany, Austria and German-speaking Switzerland.

Created by Allen Bohbot and based on an original idea by Kaaren Lee Brown, it was developed for television by Lee Brown and Kiersten Halstead, is illustrated by Mel Bontrager and executive produced by Bohbot.

“We believe the property is attractive to customers worldwide due to the high-quality CG animation, cultural diversity of characters and earnest storylines,” said Nancy Koff, VP of sales and marketing at 41 Entertainment.