Smartphone SVoD use on the rise

Smartphones will account for 40% of SVoD subscriptions by 2025, according to Digital TV Research.

Low broadband penetration in many emerging markets will contribute to the situation, with 291 million SVoD subscriptions – or 25% of the global total – expected to come direct to the SVoD platforms via mobile apps.

Another 170 million – 15% of the global total – will come indirectly via mobile operators, meaning 40% of SVoD subscriptions will be through smartphones by 2025, Digital TV Research said.

It added that by 2025, 30% of global SVoD subscriptions – or 346 million – will be indirect, either via a partnership with a mobile operator or through a distribution deal with a pay TV operator. 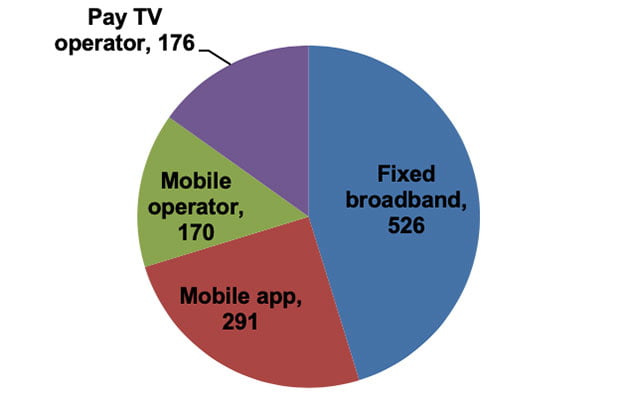 Simon Murray, principal analyst at Digital TV Research, said: “A major advantage to SVoD platforms of partnerships with local mobile or pay TV operators is immediate access to their subscribers. Local players can also undertake billing in local currencies. The operators gain commissions and kudos from carrying the SVoD platforms.”

Digital TV Research added that Netflix has expanded the number of these partnerships rapidly in recent years.

Of the 493 operators the research firm surveyed, Netflix has deals with 111. After a slow start, Amazon Prime Video is rapidly increasing its partnerships, with 52 recorded, Digital TV Research added.