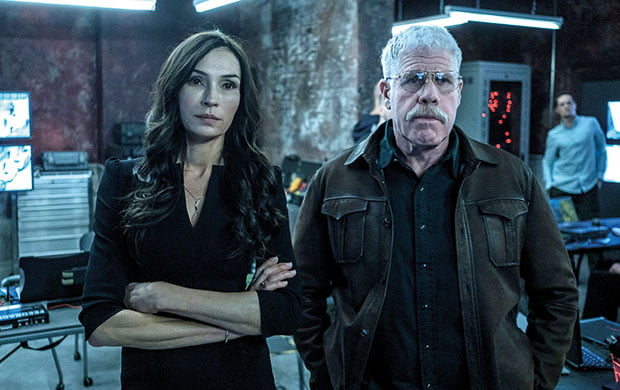 All nine will be available to stream when Peacock launches in the US on July 15.

Based on Aldous Huxley’s novel, Brave New World imagines a utopian society that has achieved peace and stability through the prohibition of monogamy, privacy, money, family and history, but it leads to a violent rebellion.

Brave New World is produced by UCP in association with Amblin Television for Peacock and Sky1 in the UK and is exec produced by David Wiener, Grant Morrison, Darryl Frank, Justin Falvey and Owen Harris. Wiener also serves as showrunner, while Harris will direct the first two episodes.

The Capture is a conspiracy thriller that looks at the troubling world of fake news and the extraordinary capabilities of the intelligence services.

The series, which premiered on BBC1 in the UK last year, comes from Heydey Television and NBCUniversal International Studios. It was created and written by Ben Chanan, who also exec produces with David Heyman, Rosie Alison, Tom Winchester, Toam Coan and Ben Irving. Derek Ritchie is the producer.

The show, which premiered on Sky1 earlier this year, is produced by Tim Hincks and Peter Fincham’s Expectation and was created and written by Nick Mohammed, who also stars alongside David Schwimmer (Friends). Mohammed and Schwimmer also exec produce with Nerys Evans and Morwenna Gordon, while Tom Hodges is co-exec producer. Charlie Leech is the producer and Matt Lipsey directs.

The upcoming films include Psych 2: Lassie Come Home, an action movie following two friends who return to their old stomping grounds to help their former police chief, but find themselves unwelcome as they secretly untangle a case that involves the supernatural.

On the sports side, In Deep With Ryan Lochte follows the US swimmer as he hopes for one more chance to make Team USA, after falling from grace during the 2016 Rio Olympics when he and three of his teammates claimed they had been robbed by armed men posing as police. Peacock and NBC Sports Films produce.

Lost Speedways, meanwhile, explores the racing speedways that have been forgotten, abandoned and overtaken by nature. Peacock produces with Dirty Mo Media, with support from NBC Sports.

In the children’s space, Peacock has added classic animated series Curious George, which comes from Universal 1440 Entertainment, and DreamWorks’ Cleopatra in Space and Where’s Waldo?.

Cleopatra in Space is a comedic adventure focusing on the untold story of the Egyptian ruler’s teenage years, as she is transported 30,000 years into the future to an Egyptian-themed planet that is ruled by talking cats and where she discovers that she is the prophesied saviour of the future world. It is based on the graphic novel series by Mike Maihack and exec produced by Doug Langdale and Scott Kreamer.

Where’s Waldo? follows the adventures of 12-year-old Waldo and his best friend Wenda, who are members of the Worldwide Wanderer Society, the international order of curious travellers who circle the globe celebrating different cultures. FM De Marco and John Tellegen exec produce.