UK media regulator Ofcom has imposed a sanction on the owner of regional network London Live after its interview with conspiracy theorist David Icke included potentially harmful content about the coronavirus pandemic. 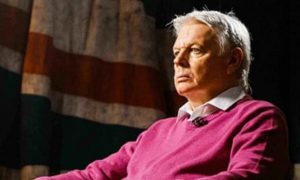 Ofcom’s investigation found Icke, a former footballer and sports broadcaster who once claimed to be the son of God, expressed views that had the potential to cause significant harm to viewers in London during the pandemic.

The regulator said it was particularly concerned by Icke’s comments casting doubt on the motives behind official health advice to protect the public from the virus.

These claims went largely unchallenged during the 80-minute interview and were made without the support of any scientific or other evidence.

London Live is operated by Evgeny Lebedev’s ESTV and has struggled to attract viewers since its launch in 2014.

“While we acknowledge that David Icke has a right to hold and express these views, they risked causing significant harm to viewers who may have been particularly vulnerable at the time of broadcast,” Ofcom said.

“Ofcom stresses that there is no prohibition on broadcasting views which diverge from or challenge official authorities on public health information. However, in broadcasting David Icke’s unsubstantiated views without sufficient challenge or context, ESTV failed in its responsibility to ensure that viewers were adequately protected. As a result, we are directing London Live to broadcast a summary of our findings on a date and form to be decided by Ofcom.”

Ofcom is now also considering whether to impose further sanctions.

The regulator has also “issued guidance” to commercial broadcaster ITV following comments made by host Eamonn Holmes during an episode of daily magazine programme This Morning on the idea that 5G mobile phone signals had caused the virus.

Holmes’ remarks had been “ambiguous”, “ill-judged” and “risked undermining viewers’ trust in advice from public authorities and scientific evidence.”

Holmes told viewers he disagreed with mainstream media outlets dismissing the 5G story as untrue without knowing it definitely isn’t the case.

“No-one should attack or damage or do anything like that, but it’s very easy to say it is not true because it suits the state narrative,” he said.

He issued a clarification during the following day’s show, saying: “For the avoidance of any doubt, I want to make it completely clear there’s no scientific evidence to substantiate any of those 5G theories.”