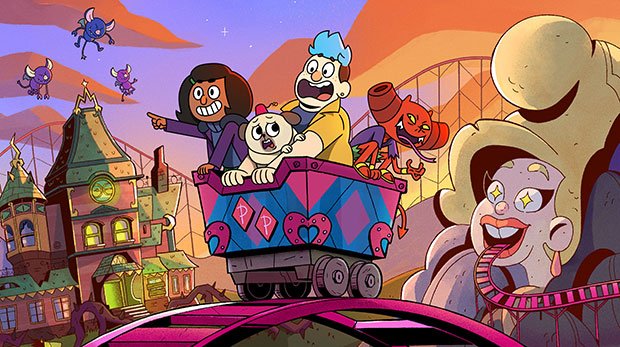 DeadEndia will debut next year

Netflix has linked with Blink Industries in the UK for an animated series based on Hamish Steele’s DeadEndia graphic novels and web short Dead End.

The 2D animated series will be produced at Blink Industries’ studio in London and will premiere globally on Netflix in 2021.

The graphic novels have been praised for capturing the growing pains of early adulthood and featuring characters with a wide variety of identities and experiences, including a transgender teen and neurodiversity.

The series follows the adventures of Barney, Norma and magical talking dog Pugsley as they balance their summer jobs at the local theme park’s haunted house with battling the supernatural forces that dwell within it.

Hamish Steele: “DeadEndia is about terrifying demons, vengeful ghosts and mysterious magic. It is also about coming of age in a world that wasn’t made for you. It’s a drama about found family, identity and making mistakes. And of course it’s a laugh-out-loud comedy.

“I’ve always dreamed of making the show I needed as a lonely, horror-obsessed closeted gay kid and, thanks to Netflix and our ridiculously talented, diverse and representative writers room and crew, we have shot way past my dreams and into wildest fantasy territory.”

In related news, Netflix has confirmed it is making DP (Deserter Pursuit) in collaboration with director Han Jun-hee, known for films such as Coin Locker Girl and Hit-and-Run Squad.

Based on the webtoon DP: Dog Days by Kim Bo-tong and produced by Lezhin Studio in association with Homemade Film, it tells the story of a South Korean army private who is assigned to a unit responsible for arresting deserters.

The perspective of a soldier tasked with pursuing other soldiers will be balanced out by the portrayal of the pains and struggles of those who choose to desert.

Elsewhere, Netflix has renewed The Kominsky Method, the series that stars Michael Douglas and Alan Arkin as an ageing actor and his agent living out their later years in LA and dodging life’s curveballs, for a third and final season.

Creator Chuck Lorre said: “It’s been an incredible experience to see the warm response from both audiences and critics. I’m excited to wrap up the story with this final chapter.”