NBC goes for continuity this fall 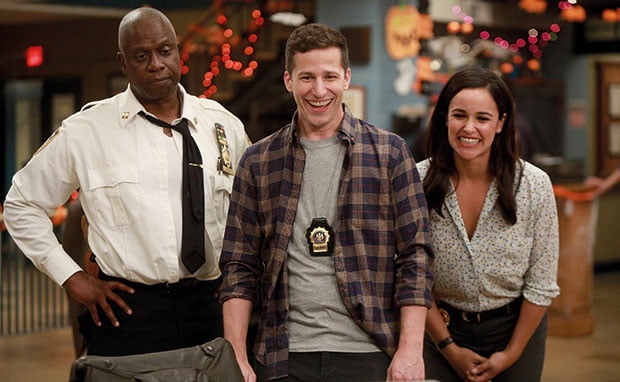 Brooklyn Nine-Nine is among the shows returning to NBC

NBC has revealed a virtually unchanged fall schedule with 16 returning shows and one new drama, although filming is yet to begin on any of them.

The network touted “unprecedented stability” across its schedule, with spin-off Law & Order: Organized Crime the only new addition. The show will air on Thursday evenings.

Like fellow US network CBS, NBC is betting that filming on its shows will be able to begin shooting in time for a fall airing.

This is at odds with networks such as Fox, which revealed a “pandemic proof” fall schedule last month made up of reality TV, animation and sports, plus scripted content either held over from last season or acquired from other distributors.

The CW is similarly relying on acquisitions this fall after deciding to delay the launch of its new season until January 2021.

Additional previously announced new series include Kenan, Mr Mayor, Small Fortune, That’s My Jam, Transplant, True Story, Who Do You Think You Are? and Young Rock.

Meanwhile, comedy series 30 Rock, which originally aired on NBC from 2006 to 2013, will return to the network, with stars Tina Fey, Alec Baldwin, Tracy Morgan, Jane Krakowski and Jack McBrayer taking part in an hour-long ‘Upfront special’ on July 16.

“Thanks to the ingenuity of our creative teams and our partner studios, NBC has assembled a remarkably stable schedule at a time when stability is called for,” said Paul Telegdy, chairman of NBC Entertainment.

“With the reopening of the Universal lot for select productions this week, we are confident that our schedule will premiere intact later this fall. We design shows for longevity, and this schedule remains a powerful propulsive force for shows to start here and carry on entertaining across generations.”

NBC has also committed to funding an additional “diverse writer” for each of its 2020/21 scripted series.

Telegdy said: “Our brand has always championed positive programming, and the events of this year have allowed us the time to take pause, examine our business with a new lens and take some immediate action.

“Since many of our writers rooms have not yet opened, we are taking this opportunity to offer all of this season’s showrunners the chance to enrich their team with an additional diverse writer at any level. It is not the solution by any means, but it is something we can do right now to take a positive step.”

The network will continue to work with NBCUniversal and studio partners on a long-term plan to increase diversity and inclusion in all aspects of its business, the firm said.