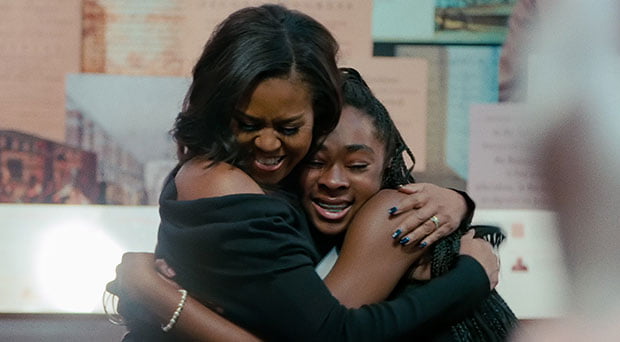 Becoming has been made by Higher Ground and Big Mouth Productions

Netflix’s next project with Barack and Michelle Obama’s Higher Ground Productions is an original documentary about the life of the former first lady.

Becoming, directed by Nadia Hallgren, will launch globally on Netflix on May 6. The doc looks at Michelle Obama’s life and follows her as she embarks on a tour after the release of her memoir of the same title.

It comes from Higher Ground, the production company established by the former president and first lady, and Big Mouth Productions, the independent documentary film prodco based in New York City run by filmmakers Katy Chevigny and Marilyn Ness.

Becoming is produced by Chevigny, Ness and Lauren Cioffi, coproduced with Maureen A Ryan and executive produced by Priya Swaminathan and Tonia Davis.

“Those months I spent travelling – meeting and connecting with people in cities across the globe – drove home the idea that what we share in common is deep and real and can’t be messed with,” said Michelle Obama.

“I treasure the memories and that sense of connection now more than ever as we struggle together to weather this pandemic, as we care for our loved ones, tend to our communities and try to keep up with work and school while coping with huge amounts of loss, confusion and uncertainty.

“It’s hard these days to feel grounded or hopeful, but I hope that, like me, you’ll find joy and a bit of respite in what Nadia has made.”

The Obamas revealed their deal with the streamer in 2018 and set up Higher Ground Productions as the entity under which they would produce content for Netflix.

Its slate of projects for Netflix includes documentaries, a children’s show and a New York-based drama set in the world of fashion.