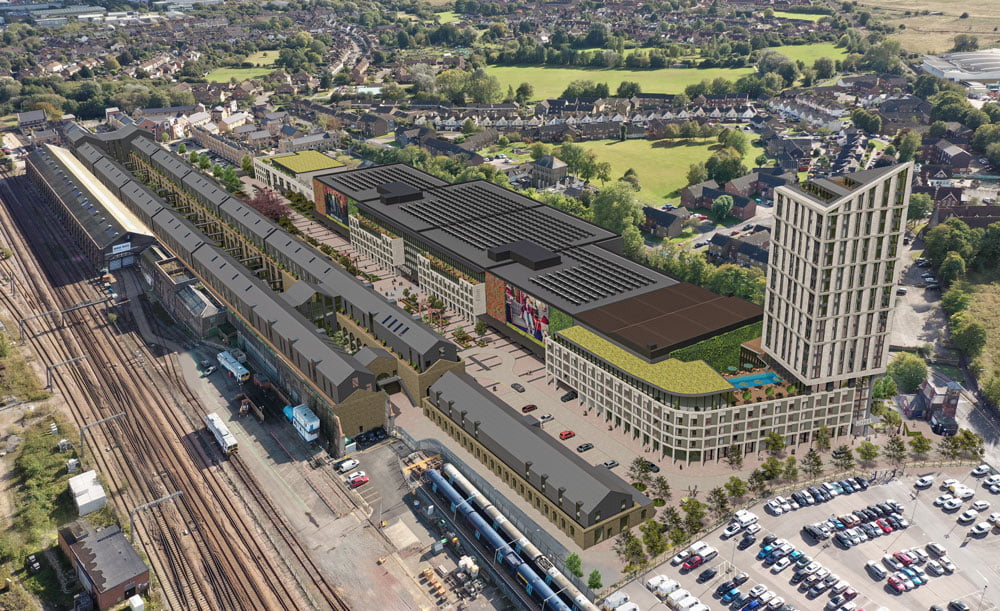 A CGI rendering of the Ashford studios (click to enlarge)

Authorities have approved ambitious plans to convert the derelict Newtown Railway Works in the UK county of Kent into four TV and film studios in a £250m (US$309m) project.

Councillors overwhelmingly supported the decision to convert the buildings at the first ever virtual meeting of Ashford Borough Council last night.

The 15-acre site, which comprises five abandoned Grade II-listed buildings in Ashford, was home to a locomotive manufacturing company from 1847 until the early 1980s.

It will now be transformed into 240,000 square feet of dedicated production space by regeneration firm The Creative District Improvement Company (TCDI Co) and property developer Quinn Estates, with the aim of creating more than 2,000 jobs.

TCDI Co said global streaming giants such as Amazon and Netflix had shown an active interest in the scheme as they seek to meet booming demand for content.

The plans also include a 120-room hotel, 68 serviced apartments, a creative industries conference centre and a 10,000 sq ft gym, restaurant and leisure space.

The project is part of TCDI Co’s £500m plan to revolutionise the industry with a network of studios across the UK.

The completion date has been pushed back from 2021 to early 2022, with the site set to become the UK’s largest TV and film studio outside London. TCDI Co and Quinn Estate are collaborating with architects Guy Holloway to deliver the project.

TCDI Co will work with the Thames Estuary Production Corridor, a long-term project that aims to create the world’s largest creative corridor, transforming North Kent and South Essex to establish the region as a creative hub connected to London, the rest of the UK, Europe and other global markets.

Piers Read and Jeremy Rainbird, founders of TCDI Co, said: “Amid this current global pandemic, it is extremely exciting to be given the go-ahead by the council to start work on what will become one of the UK’s biggest creative hubs.

“Global streaming giants have already expressed interest in the scheme as demand for their services booms and before there is a huge backlog in production, as people stay at home and burn through original content at record levels.

“We have the ability to create thousands of jobs for people, which is crucial at this time, and we will also be able to ensure creative talent and skills are harnessed and nurtured through our planned education centre. We are thrilled that the council recognise the importance of Ashford International Studios and have given consent to this development, which will deliver huge opportunities through its massive expansion of the industry in the UK.”

Adrian Wootton OBE, CEO of the British Film Commission and Film London, said: “The UK screen industries have been experiencing an exceptional boom time and we look forward to building on this by continuing as an industry to invest in skills and develop our world-class infrastructure.

“We are, of course, operating in unprecedented times and the impact of Covid-19 will undoubtedly be felt deeply by screen industries as we work through this ever-evolving situation. Today’s announcement highlights the industry’s commitment to an ongoing strategy to ensure its sustainability, building on the UK’s rich history of attracting filmmakers, nurturing talent and creating world-class content.”

Mark Quinn, CEO of the project’s master developer, Quinn Estates, said: “This is fantastic news, both for the town of Ashford and the broader South East region. The decision means we can collectively start to rebuild the industry, jobs and momentum temporarily lost as a result of what has been happening globally, building on the investment in the town that has already been made to deliver an exciting new era for Ashford.”

TCDI Co recently acquired Twickenham Film Studios and has announced plans to extend the current success in a £50m development deal backed by General Projects and British Airways Pensions that will include film stages, flexible workspace for creative industries with new event and hospitality spaces.

Time + Space Studios, the sister company of TCDI, has already committed to operating the Littlewoods Studios in Liverpool, which forms part of the expansion strategy.