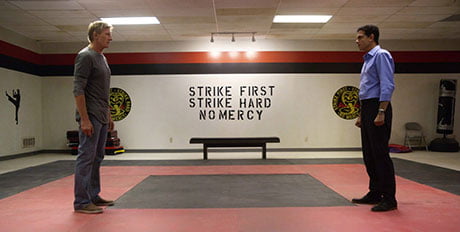 Netflix has picked up Cobra Kai, a series continuation of the Karate Kid film franchise, and will air a previously unseen third season.

Cobra Kai sees original cast members reprise their roles and takes place 30 years after the events of the 1984 All Valley Karate Tournament, where a now successful Daniel LaRusso (Ralph Macchio) struggles to maintain balance in his life without the guidance of Mr Miyagi.

Two seasons had originally aired on YouTube and a third was in the works before the streaming service abandoned its original scripted content ambitions. The first two, which aired in 2018 and 2019, will be available on Netflix this year with the unseen third to air at a later date.

Brian Wright, VP of original series at Netflix, said: “The appeal of The Karate Kid saga is timeless, and Cobra Kai picks up right where it left off without missing a beat. The rivalry between Daniel and Johnny is one for the ages, and the show has a ton of heart and is a lot of fun. We can’t wait to introduce a new generation of fans to Cobra Kai and are thrilled to be its new home around the world.”