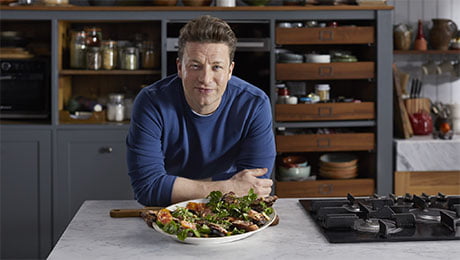 Jamie Oliver is filming the show from his home

TVNZ in New Zealand, Manoto TV in the Middle East and North Africa, Fox Network Group in the Middle East, MTVA in Hungary, 24Kitchen in Turkey, Bulgaria and the Balkans, Fox in Russia and Canal+ in Poland have all picked up Jamie: Keep Cooking & Carry On.

They join Channel Ten in Australia and CTV in Canada in acquiring the 5×30′ series, which began airing on Channel 4 in the UK last week, with the chef dishing up recipes specifically tailored to life under the coronavirus lockdown.

New episodes, produced by Jamie Oliver Productions, have been airing this week, with Oliver having to film segments of the show himself after the UK government imposed stricter lockdown measures.

Oliver has been filming himself cooking the recipes at his home on his iPhone and without a crew, while members of his family of seven step in to help. Production meetings are held via Google Hangouts.

The show also features recipes from Oliver’s archive of shows – those that he feels are relevant – and he will explain what possible ingredient swap-outs people can use depending on what they have at home.

The show was commissioned by Sarah Lazenby, Channel 4’s head of formats and features, and commissioning editor Timothy Hancock. Sam Beddoes is the executive producer and Katie Millard is series producer for Jamie Oliver Productions.

Angela Neillis, Fremantle’s senior VP of non-scripted content, international, said: “In response to international demand, we are supporting Jamie Oliver to bring this stripped-back and fun show to audiences around the world with simple and clever ideas on how be creative in the kitchen.”