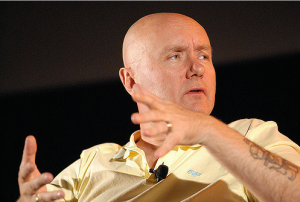 The series, which has the working title American Tabloid, will span a period of decades and follow events at a weekly publication where the writing team lack all sense of political correctness, morals or ethics.

The deal is expected to be confirmed in the coming weeks, with development plans to follow.

“To do this production justice we always knew we would require writers who don’t hold back and go way further than most would dare,” said Shelley Hammond of Burning Wheel.

“We are just beyond delighted that we are ready to agree a deal to make this happen with the incredible talent of Bret and Irvine. This would be the first time the two have collaborated professionally – and with the support to allow creative freedom we are confident spectacular things will happen.”