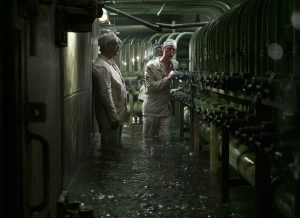 UK-based pay TV operator Sky has linked up with HBO in the US on a darkly comic drama from Chernobyl prodco Sister.

The Baby has been co-created by Siân Robins-Grace (Sex Education) and Lucy Gaymer (Gangs Of London), with Sister producing alongside Proverbial Pictures. It will be filmed in the UK in 2021.

The horror, which will air on Sky Atlantic and streaming service Now TV, is described as “a funny, raw examination of motherhood as an institution” that explores how a new mother’s life is turned upside down by the arrival of her child.

The show “gleefully deconstructs the ‘joy of motherhood’, exploring the powerful anxiety of whether or not to have children, questioning who gets to choose ‘motherhood’ and who doesn’t,” the commissioners added.

Robins-Grace, who writes, and Gaymer, said: “With The Baby we want to explore the powerful anxiety around the question of whether or not to have children.

“The ambivalence of not knowing, the bafflement at everyone else’s certainty and the suspicion that the whole thing is one millennia-long scam. We’re thrilled to be working with such a phenomenal team of producers to help us bring this weird baby into the world with HBO and Sky.”

Cameron Roach, director of drama at Sky Studios, added: “The Baby is by turns dark, comedic, and horrifying. The vision that Siân and Lucy are bringing to life is truly unique.”

Amy Gravitt, EVP of HBO programming, said: “Siân and Lucy’s exploration of motherhood is as funny and resonant as it is twisted, The Baby gives voice to all the women who just don’t know. We’re thrilled to be partnering again with Jane Featherstone, Carolyn Strauss, and our friends at Sky.”

The eight-episode first season will be executive produced by Sister’s Featherstone, Strauss and Naomi de Pear alongside Katie Carpenter and Robins-Grace.

The show is the latest drama to come from Sky and HBO, which unveiled a $250m high-end drama deal in 2017 that has to date delivered Chernobyl. The pay TV operator’s recently launched Sky Studios division also has an agreement to co-produce content for streamer HBO Max, as revealed by TBI last year.