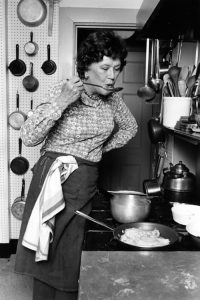 Julia is an eight-parter that is being produced by Lionsgate Television and 3 Arts Entertainment, with Lancashire starring alongside David Hyde Pierce (Frasier). Charles McDougall (House of Cards) directs, while Daniel Goldfarb (The Marvelous Mrs. Maisel) is writing.

The show, which is scheduled to continue production late spring in Boston, has been inspired by Child’s life and TV series, which pioneered the now popular genre of cooking shows.

Chris Keyser (The Society) will serve as showrunner as well as executive produce along with 3 Arts’ Erwin Stoff (Edge Of Tomorrow), Charles McDougall, Daniel Goldfarb and Kimberly Carver. Todd Schulkin is a consulting producer on behalf of The Julia Child Foundation for Gastronomy and the Culinary Arts.

“We are so happy to help bring the incomparable Julia Child back to the small screen, when we need her more than ever,” said Sarah Aubrey, head of original content for HBO Max. “This show’s look into her life, marriage, and trailblazing career as she transformed the way we talk about food is an absolute delight.”

“We’re delighted to expand our relationship with HBO Max by teaming with our production partners at 3 Arts on Julia, the complex and compelling story of the celebrated chef, author and TV personality who almost single-handedly invented the world of food television,” said Jocelyn Sabo, Lionsgate Television Group’s SVP.