UK television production revenues hit a record high of £3.3bn ($4.2bn) during 2019 driven largely by international commissions which showed huge growth over the past year, according to UK producer body Pact.

International revenues broke £1bn in 2019 for the first time, with income from sales and commissions from outside of the UK up 30% on the previous year, with the figure now at £1.25bn.

Orders from streamers and networks from outside of the UK helped commissioning revenues to rise by 40% on 2019, with international linear TV spending rising by £226m in 2019, accounting for the majority of growth.

Overall, international broadcasters commissioned more than £650m of content (primary rights) in 2019, while streamers such as Netflix and Amazon Prime spent £337m.

The figures, which were revealed today in Pact’s UK Production Census and put together by Oliver & Ohlbaum, mean international now accounts for 38% of total UK production sector revenues.

The findings, which are made up of 72 completed responses that represent around 80% of the total UK industry turnover, also showed that domestic revenues had reached a new high of £1.9bn, a 3% increase on 2018.

The BBC remains by far the highest spending commissioner of new programming, with its orders accounting for more than a third of all spend on commissions in 2019. 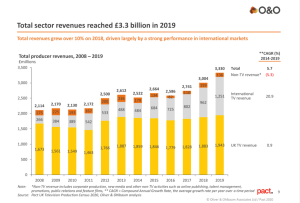 The report also found that since 2018, there has been an increase in medium sized producers, although smaller producers continue to make up the bulk of the UK sector (42%).

Across the networks, ViacomCBS-owned Channel 5 spent the highest proportion of its commissioning budget with smaller producers, with 20% of its independent suppliers in the £1-5m turnover bracket.

Spending on drama continued to grow, with a 5% rise on 2018 that means scripted accounted for 40% of all UK primary commissioning spend last year.

Both entertainment and factual content saw an increase in commissioning spend too, together accounting for 37% of the market – also a 5% increase in total.

Presenting the findings this morning, Pact CEO John McVay said the results were an “historic moment” for the UK industry.

“We have never seen numbers like that before and I’m very pleased with that and I’m hoping that the revenue is helping to cushion indies from some of the challenges the sector is facing during the pandemic.” 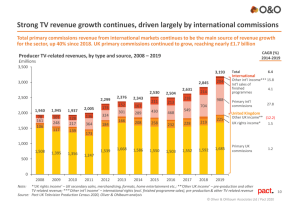 McVay, who has been leading industry efforts to secure support from the UK government, added that he believed producers were now operating at around 70% of where that had been prior to the pandemic.

The UK government unveiled a £500m ($650m) scheme designed to help domestic film and TV productions struggling to get Covid-19 related insurance last month, but a formal start date for registration has not yet been provided.

McVay said further details would be provided as soon as regulatory clearances had been overcome.

Sara Geater, chair of Pact and All3Media’s COO, added that the international figures in particular pointed to the “broad base” of buyers of UK content.

“These record revenues show very clearly that the indie sector has had huge success in 2019, reflecting the importance of our independent TV production sector to the international market. We can look forward to the production levels from UK indies returning to meet the global demand for the high quality, original content that audiences around the world love.”

Geater added that producers were continuing to work with broadcasters to improve tariffs hit by the pandemic, adding that “while the industry has taken a hit, we are expecting it to recover.”