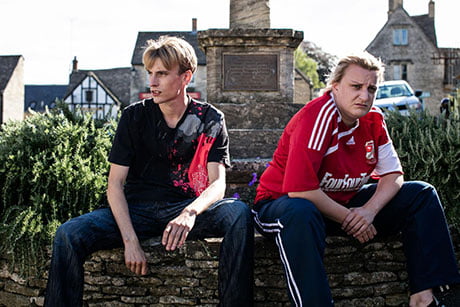 BBC mockumentary This Country is set in a small English village

US broadcast network Fox has extended the options for all six of its current pilots, comprising two single-camera comedies and four dramas, all of them written by women.

From Warner Bros Television and Kapital Entertainment, Pivoting is a half-hour comedy written by Liz Astrof. The show follows three women after the death of their childhood friend who, faced with the reality that life is short, make a series of impulsive, ill-advised and self-indulgent decisions.

The second comedy is This Country, from Lionsgate, BBC Studios and Feigco Entertainment. Written by Jenny Bicks, the half-hour show is based on the BBC’s mockumentary sitcom of the same name, where a documentary crew goes to a small town to study young adults and their current concerns.

In drama, The Big Leap is a one-hour show from 20th Century Fox Television and written by Liz Heldens. Inspired by UK pubcaster Channel 4’s 2014 documentary Big Ballet, The Big Leap centres on a group of diverse underdogs who compete to be part of a competition reality series putting on a modern interpretation of Swan Lake.

From Paramount Television Studios and Anonymous Content comes Blood Relative, a one-hour crime drama written by Chris Levinson and James Renner. It is based on Renner’s article Beyond the Jungle of Bad: The True Story of Two Women from California Who Are Solving All the Mysteries.

One-hour character drama The Cleaning Lady, from Warner Bros Television and written by Miranda Kwok, focuses on a whip-smart doctor who goes to the US for medical treatment to save her ailing son. But when the system fails and pushes her into hiding, she refuses to be beaten down and becomes a cleaning lady for the mob.

Finally, Untitled Film Re-Enactment Project is the working title of a one-hour drama from Warner Bros Television and Amblin TV. Written by Sarah Watson, the show follows a woman with a heavy secret who returns to her distressed automotive hometown as a substitute teacher after failing to make it in New York.

All of the series will be coproductions between Fox Entertainment and their respective studios.

Michael Thorn, president of entertainment at Fox Entertainment, said: “Entering Fox Entertainment’s first development season as a new company, our methodology was to carefully curate our content more like a start-up – looking for new opportunities, new stories and new voices in ways perhaps others might not be able to.

“As such, narrowing down these projects to only those that met our standards from the beginning, we still believe this crop of pilots – all from some of the finest writers, producers and talent in the business –represents what Fox is trying to accomplish in pilot season and, more importantly, for our year-round ambitions.”