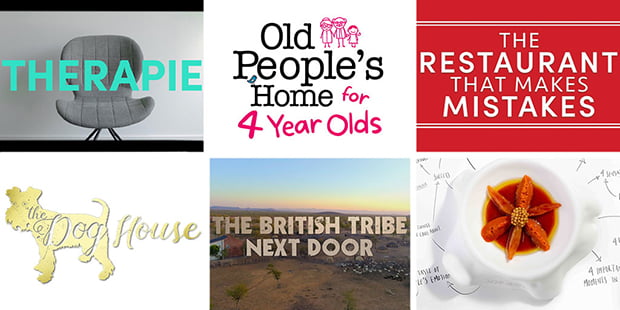 C21 has unveiled the finalists in the Best Factual Entertainment Format category in the International Format Awards 2020, which is organised in association with FRAPA, EMC and MipFormats.

The International Format Awards will be presented online this year with a digital event initiative that runs between June 10 and 25, sponsored by All3Media International and ITV Studios. The finalists in each category of the awards will be revealed daily until June 23, with the event taking place ‘as live’ online on June 25 at 7am PST/10am EST/3pm BST/4pm CET.

The Australian entry is the ABC’s adaptation of Old People’s Home For 4 Year Olds, produced by Endemol Shine Australia and based on the UK format distributed by Red Arrow Studios International. The format debuted on Channel 4 in 2017 and was adapted for ABC in August last year.

From Belgium comes Therapy, a Panenka production for VRT (Eén) that is distributed by LineUp Industries. As more than one in four Europeans has dealt with psychological disorders in the past year, according to the World Health Organisation, this timely show tackles mental health issues by allowing access to the intimate discussions between therapists and their clients. It debuted on VRT-owned channel Canvas in March 2019 and has since been renewed for season two.

Spain is also represented in this category, in the shape of The Dinner of a Lifetime from The Mediapro Studio and Phileas Productions for Amazon Prime Video. In the show, which debuted on the SVoD platform in Spain and Mexico in December, triple Michelin star chef Quique Dacosta cooks for celebrity guests.

Finalists in the category also include three from the UK’s Channel 4: The Dog House, The Restaurant That Makes Mistakes and The Tribe Next Door. From Five Mile Films and distributed by All3Media International, feel-good format The Dog House follows abandoned canines that are given new homes.

Rounding out the finalists in the category are UK formats The Restaurant That Makes Mistakes, meanwhile, is from CPL Productions and WPP-owned Motion Content Group and distributed by Red Arrow Studios International. The show follows dementia sufferers who are given the chance to run a restaurant and debuted on C4 in June 2019.

Lastly, The Tribe Next Door, from Voltage TV and Motion Content Group, follows a Western family who are sent to live in an exact replica of their house among a remote nomadic tribe in Namibia. The show debuted in November and the format is distributed by Banijay Rights and Voltage/Motion Content Group.

Watch out for the finalists in the Best Host of a Format category tomorrow on C21Media.net.