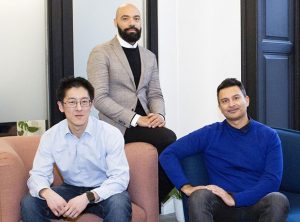 The agreement will see Three Tables produce and develop original drama that eOne will distribute globally.

The prodco is currently developing several dramas aimed at both the UK and international markets, including projects for the BBC and France Télévisions.

The company was founded in 2018 by execs David Chikwe, Himesh Kar and JT Wong, who were joined by development assistant Holly Boyden. The outfit aims to explore new funding models and work with established and emerging talent.

Chikwe was formerly head of development at Leopard Pictures, where he co-created and produced the Bafta-nominated Eve and BBC1’s Missing. He also set up Leopard sub-label Blacklisted Films.

Prior to Three Tables, Kar was a senior executive at the UK Film Council, responsible for selecting and overseeing the development, production and financing of more than 20 films, including Man On Wire, Walk With Me and A Way of Life.

Wong previously co-founded Mystical Productions, which was behind the BBC’s The Mysti Show. Prior to that, he served as principal at MCM Capital, a family investment firm.

Noel Hedges, eOne’s executive VP of acquisitions and international distribution, said: “We are continually looking for ways to grow our distribution pipeline with commercial and individual content from truly creative suppliers. This new deal with Three Tables is a great opportunity to get in at ground level on just that.”

Three Tables previously worked with Fremantle to develop a TV version of the novel The Robber Barron’s Daughter.