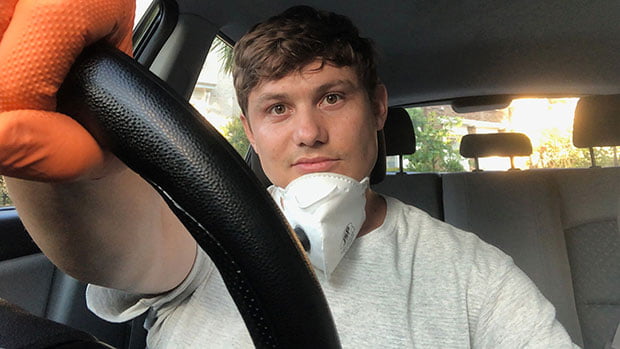 Jon Pointing as Bradley from Bromley in Key Worker

UK-based Baby Cow Productions has launched an online comedy series self-shot by Plebs star Jon Pointing while he volunteered for a local food bank during the Covid-19 pandemic.

Pointing, who is best-known for his roles in ITV2 comedy Plebs and BBC3 mockumentary Pls Like, started volunteering at a London food bank with his girlfriend in March.

The actor began filming his journeys between visits to the local shops and socially distant doorstep drop-offs in character as a young man named Bradley from Bromley.

The result is Key Worker – a self-shot character comedy series following a 20-something lifted from his adulthood inertia by a newfound purpose in life.

“Just before the lockdown, I’d been testing out the character of Bradley at gigs. His heart is in the right place – he’s a bit of an idiot at times but a well-meaning one,” Pointing said.

“He’s never made much of a life, but lockdown has forced something of a level playing field on society and, for some reason, he finds himself flourishing in the most unlikely of situations. I wanted to make a character that people would enjoy spending time with. It feels sweeter than the sort of thing I would normally do – I think the reality of the situation dictated that.”

Key Worker (4×10′) is produced by Rupert Majendie and Joe Fraser for Steve Coogan’s Baby Cow Productions. The first three episodes are available now via the Mr Box YouTube channel, while the final episode will be released tomorrow.