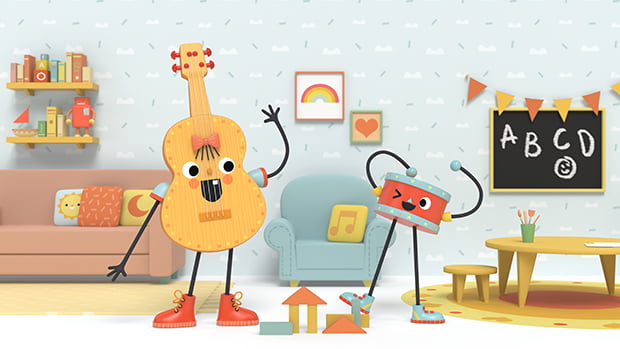 Guitar & Drum premiered on Disney Channel in Lat Am

Produced by Punkrobot Animation Studio in Chile and Brazil’s Hype Animation, Guitar & Drum (52×5′) follows the adventures of two musical instruments who are best friends. The series celebrates diversity through a wide range of characters while addressing cultural topics, personal abilities and different tastes, showing how differences can build a better world.

“Guitar & Drum is a beautiful series with important messages about inclusivity which we’re thrilled to bring to an international audience,” said Alix Wiseman, senior VP of distribution and acquisitions at 9 Story.

Antonia Herrera and María Elisa Soto-Aguilar, who directed the series, added: “Guitar & Drum has powerful messages of acceptance, respect towards others and empathy. We hope it will inspire children to be kinder to one another, and to see each other’s differences in a positive light.”